Minnesotans looking to help their neighbors buy groceries or other supplies during the COVID-19 pandemic now have an easier way to do so. That’s thanks to an app developed by a Maple Grove resident and some of his friends from the University of Minnesota.

The idea came about in 2017 when Bharat Pulgam was a freshman at the U of M. He was walking back from class when a friend texted him and asked if he could pick up a burrito from Chipotle along on the way. When Pulgam brought the burrito back to his dorm, three of his friends said to him, “hey why didn’t you let me know you were going to Chipotle? I would have ordered something too.”

That interaction led Pulgam, a graduate of Wayzata High School, to develop an app called Pikup with his friends Josh Chang, Sam Lerdahl and Ashley Klein. Simply put, Pikup allows friends and neighbors to connect with people nearby who need something. 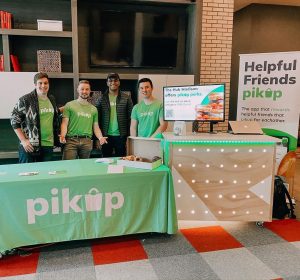 The Pikup team gathers to show people how the app works.

“We made the app really simple to use, and the person posting the pickup has a lot of control,” said Pulgam, CEO of Pikup.

For example, say you were going to Target. Through Pikup, you could let certain people from your neighborhood know where you’re heading. Those people can then ask you to grab something for them while you’re out shopping. If you’re able to fulfill their request, not only do you get a sense of satisfaction from helping someone in need, but Target will provide you with some sort of reward for being a good neighbor.

The creators originally developed Pikup for college campuses. Then, the COVID-19 outbreak happened and they realized that the students weren’t going to be coming back from spring break. So they decided to switch gears.

“We pivoted to focus on neighbors and neighborhoods, especially during this time, help get what they need for one another without having to go to the store or put others at risk,” Pulgam said.

In the several weeks since they shifted their focus, 65 neighborhoods have applied to launch Pikup. 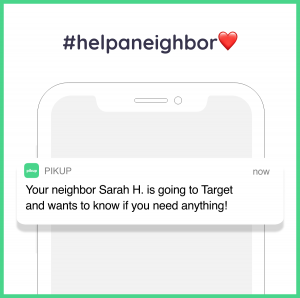 “You could basically apply, and then we’ll help the person that applied learn about how to use the app and how to share it” Pulgam said. “And the key is as soon as they get five people in the group, we mail print invitations to everyone else in the neighborhood.”

In the coming weeks, Pulgam and his team will try to figure out things such as how to get more neighborhoods signed up, whether they should partner with assisted -iving facilities, and how to get other merchants on board (partnering with merchants is how they make money).

Ultimately, the goal is not only to get more people signed up and using the app, but to limit the number of trips people have to make to a store.

“Next time you go out, just remember that someone in your neighborhood might need something, and that you can help,” Pulgam said.

There is no charge to use Pikup.