Gary Current, a longtime member of the Osseo Fire Department, is calling it quits at the end of October after 37 years of service.

“After 37 years in the fire service, I think it’s time,” Current said. “We’ve got a good core group of young firefighters coming up.”

Gary Current started his career with the Osseo Fire Department back in 1983.

From there, he worked his way up the ranks, serving as a lieutenant, then becoming chief in 1996. 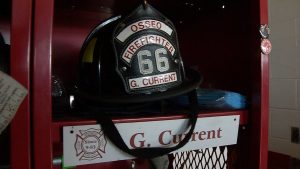 Gary Current has worked with the Osseo Fire Department since 1983.

He served in that role for 13 years, retired for 10 months, then had a change of heart and came back to the department as a regular firefighter.

One moment stands out above the rest

But despite all of his career accomplishments and the service he dedicated to his hometown, there was one moment that stands out the most.

“I got to pin his badge on. That’s probably the proudest moment,” Current said.

He’s referring to the moment when his son, Brendan, was sworn in to the Osseo Police Department in April of 2015.

“And my wife asked my son, ‘Why did you want to be a police officer?’ And his comment was, ‘To do something meaningful with my life.’ I thought that was one of the best comments anybody could ever make,” Current said. “And looking back, that’s probably why I got into fire service.”

As for what he’s going to do next, Current simply said he’s going to relax. His first retirement activity is a hunting trip to Montana.