Shannon Johnson is part of the Snow Angels team. The team has competed in the snow sculpting competition for five years. This year they sculpted a gorilla. 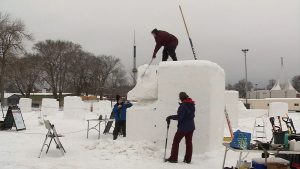 “We decided we’d start a little theme with girls and science going forward. So this year we thought a gorilla would be awesome. It’s a attribute to Diane Fossey,” explained Johnson.

All 13 teams competing will get 2 1/2 days to sculpt before being judged on Sunday.

“We have to make our own tool, we don’t get any power tools because this is not ice its snow,” said Johnson.

Johnson said the game plan is to get rid of excess snow the first day and then work on details on the second and third day.

“Just to show little animation we have him tipped up 20 degrees, it’ll be diagonal in the block,” explained Jason Moe from Golden Valley.

Moe is confident his team will pull through, despite it being their first time snow sculpting.

“We’ve got a vision of what we’re going to be producing and we’ve measured it up and modeled in cad software in 3 dimensions, got it all measured out,” Moe said.

While sculptors labor away morning till dusk, it’s clear hard work pays off, even without a win.

“At the end its always something awesome you get to be proud of and everyone’s is different and you’re like oh my gosh, how did we all start with the same thing,” said Johnson.

The award ceremony was held Sunday afternoon. First place winners will get $1,200 and a chance to go to nationals in Lake Geneva, WI.