Local Retail Expert: “We Have Never Seen Anything Like This”

At GoodThings, unique gifts have been the retail store’s specialty for 47 years. The Shoppes at Arbor Lakes is one of its seven Twin Cities locations.

“Our store provides entertainment. Shopping is entertainment,” said owner Tyler Conrad. “And I think being a specialty home-grown store, you come in not only to get surprised around every corner, but you also come in there for the friendship that you develop with all of our staff.” 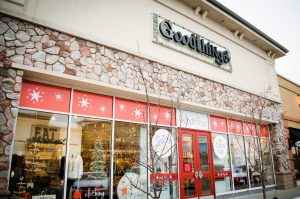 But due to COVID-19 and the Minnesota governor’s stay-at-home order, that experience has gone away. GoodThings has had to turn to something it never had before – an online presence. Conrad said the store started online sales through its website two weeks ago. Today for the first time it will roll out curbside delivery, which Governor Tim Walz permitted during an amended executive order last week for retailers deemed non-essential.

Even then, Conrad says that won’t be enough to meet expenses. Sales at GoodThings are down 90 percent since the pandemic hit Minnesota, he said. And Conrad had to lay off all his staff, which normally employs about 79 workers among all its locations.

“It’s a huge struggle not have customers in our doors,” Conrad said.

The U.S. Department of Commerce said retail sales fell 8.7 percent in March from the month before. It’s by far the largest decline in the nearly three decades the government has tracked the data.

George John, a professor at the University of Minnesota’s Carlson School of Management, says the pandemic has not only hit retail hard, but everywhere else too. 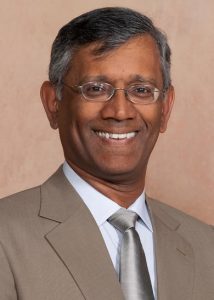 Professor George John, U of M Carlson School of Mgmt.

“It’s hit a lot of different sectors, so I don’t want to say it’s just a retail story,” said John. “It’s like a natural disaster hitting the whole economy. The analogy I draw is like a tornado.”

The Minnesota Retailers Association says retailers account for more than 69,000 businesses that impact 780,000 Minnesota jobs, from national brands to small independent shops like GoodThings. The direct economic impact of retail adds up to $20 billion in the state.

“If you and I will drive through The Shoppes at Arbor Lakes a year from now, visually, I don’t think you will see much change. But internally, the operations of the companies and stuff, there will be massive changes.”

On Comparisons to the Great Depression

The nation’s gross domestic product (GDP) shrank at a 4.8 percent annual rate from the beginning of January to the end of March, the biggest drop since 2008, the time of the Great Recession. The coronavirus pandemic is likely to trigger an even more massive decline not seen since the Great Depression some 90 years ago, market analysts have warned.

Professor John says you can’t compare today’s economic shock to the Great Depression because of how sudden the modern toll has been.

“The analogies are not there. We have never seen anything like this,” said John.

John says the Great Depression is “more like our Great Recession, it was a grinding time.” He says the coronavirus pandemic economic situation is different.

“This has been boom, it all caved in one day.”

The U of M professor believes retailers and sit-down restaurants could feel the biggest impact from the change of behavior from baby boomers, the generation with the most disposable income, but also of higher risk for the virus.

“I truly believe all the baby boomers are going to shift their behavior patterns for a considerable period of time.”

Retailers like Down in the Valley have survived plenty of changes over the years. What started out as a place to buy vinyl records in the 1970s came around full circle when sales of vinyl experienced a rebirth last decade. During the pandemic the store, which has locations in Golden Valley, Crystal and Maple Grove, offers a “virtual vinyl happy hour” on Friday evenings through its Facebook page. 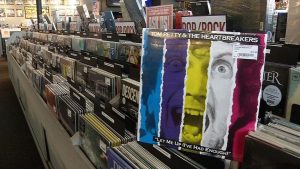 Vinyl a big seller at Down in the Valley

Down in the Valley got ahead start on curbside pickup when it voluntarily closed the inside of its stores on March 18 because employees weren’t feeling comfortable.

“It wasn’t a 100 percent of business, but it still was a good chunk of business that made it well worth our while,” said Scott Farrell, general manager of Down in the Valley

The governor’s stay-at-home went into effect March 27. An amended executive order allows all retailers to once again offer curbside pickup starting May 4. That’s in addition to online sales.

“It was heartwarming to see the orders come piling in,” said Farrell about his loyal customers.”That made us put more focus into the online that will probably pay off after we’re even through this.”

“People are chomping at the bit to get at least to a curbside,” he said.

For retailers like GoodThings, Conrad hopes people will think of the importance of small businesses before they click. 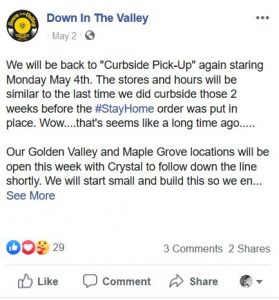