The prime minister of Israel, Benjamin Netanyahu, who earlier had approved the visit, reversed course. Netanyahu cited Omar’s vote in the U.S. House against a resolution that condemned a boycott movement against Israel. Omar, who is Muslim, says the vote was done to pressure Israel economically to improve its treatment of Palestinians. Omar’s colleague, U.S. Rep. Rashida Tlaib of Michigan, was also disinvited. Omar and Tlaib are the first two Muslim women in Congress.

Omar released a statement Thursday afternoon, saying “denying entry into Israel not only limits our ability to learn from Israelis, but also to enter Palestinian territories.” 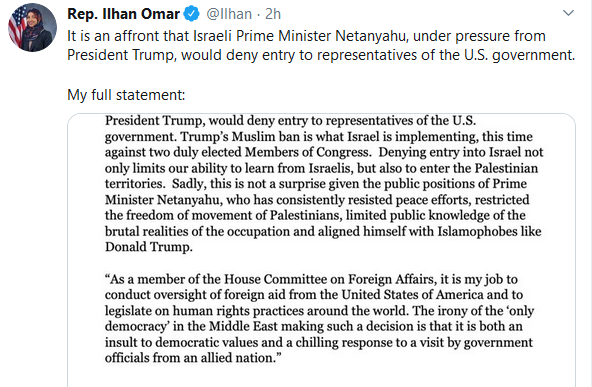 President Donald Trump and Omar have trading highly critical tweets for months. Omar was one of the first House Democrats to support impeaching the president. President Trump released a tweet Thursday morning pressing Netanyahu to block the visit.

Phillips, a Democrat who is Jewish, said Israel’s “action sets a damaging precedent for a free and democratic nation and our most important ally in the region.”