The Aug. 11 primary election is almost here, and while there’s a big push to do mail-in voting this year to help limit the spread of COVID-19, voters still have the opportunity to do in-person absentee voting.

That process kicked off Tuesday morning in Brooklyn Park with some enhanced safety measures in place.

“We, for the last few elections, have been voting early,” said Duayne Malewicki, a Brooklyn Park voter. “We find it’s more convenient, as long as we’re retired we can do that at a time schedule that works for us, and we don’t have to stand in the long lines that they usually have.”

Malewicki was one of a couple dozen people to exercise his civic duty Tuesday morning when in-person absentee voting began at the Brooklyn Park Community Activity Center. 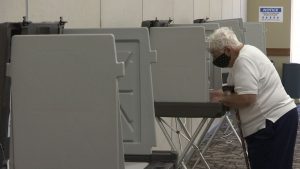 A voter went to the Brooklyn Park Community Activity Center on Aug. 4 to vote in the Aug. 11 primary election.

Brooklyn Park has several city council races on the primary ballot, but city officials expect turnout to be relatively low inside this polling place.

However, anyone who decides to vote this way will see hand-sanitizing stations, signs to remind people about social distancing, and plexiglass barriers to separate election workers from the general public.

There’s even a curbside voting option for people who don’t want to leave their vehicles.

“That’s always been part of the election process,” Brooklyn Park City Clerk Devin Montero said about curbside voting. “But given the COVID-19 environment, we’re promoting that more and more. So that process has always been available to voters who had a hard time coming into the polling place, etc.”

If you decide that curbside voting is the route you want to go, all you have to do is pull your car up to the front door of the Brooklyn Park Community Activity Center during voting hours and call 763-493-8032. Two election judges will come out and bring a ballot to your vehicle.

In-person absentee voting for the city of Brooklyn Park will be held from August 4-10, from 8 a.m. to 5 p.m.