The additional libraries include Brookdale in Brooklyn Center and Rockford Road in Crystal. You can see the full list here. The county is moving quickly to restore some services at these libraries, possibly this week or early next.

Opat described the resolution as a “little thin on dates.” 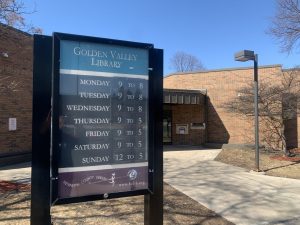 Golden Valley Library would remain closed in 2020 under the plan.

“People are wondering when we’re going to get the libraries open because we’ve done a lot of talking” Opat said at Tuesday’s meeting. “This resolution sets up a menu, but it doesn’t tell us what’s on it though.”

According to the reopening plan, libraries will continue the reintroduction of limited in-person services that meet the county’s standards for safe, sustainable service. Upcoming phases include expanded curbside pickup, expanded book returns, computer use by appointment, and grab-and-go services that accommodate short duration visits.

County commissioners requested a better timeline for when the closed libraries would reopen in 2021.