It was a special day Monday for Courage Kenny in Golden Valley as they entertained a unique guest. Australian Alana Biddle stopped by as part of her 2-month holiday in the U.S. She wanted to see how Courage Kenny helps people with disabilities because she has a special connection to the facility. 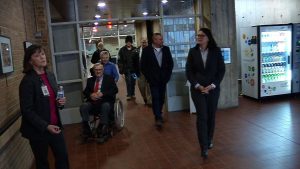 She’s the great grand-daughter of Sister Elizabeth Kenny, the founder of the Sister Kenny Rehabilitation Institute which merged with Courage Center in 2013.

“Her legacy has prompted so much innovation and help for people with strokes and spinal injuries,” said Biddle. “Rehabbing people, getting them back to work, back in their homes. It’s really inspirational that her legacy is still used today.”

Biddle added that she’s very proud of her great grandmother and the work she did in the 1940’s that led to the rehabilitation center. During the visit, Biddle met with Allina Health and other staff members. Then, she toured the programs both at the Golden Valley campus and at Abbott Northwestern Hospital.