GOP on Track to Hold 35-32 Edge in Minnesota Senate

There’s still a lot we don’t know about Tuesday night’s election, but there are a couple things we do know.

On a national level, Minnesota stayed blue and voted for Joe Biden. Hamline Political Science Professor David Schultz provided his thoughts as to why Minnesota supported the Democratic candidate for president.

“Joe Biden did campaign in this state. Unlike four years ago where after — at that point we still had a caucus — after the caucus when Hillary Clinton got beat by Bernie Sanders, she never came back to campaign during the general election,” Schultz said. “And this time, Donald Trump did come back, campaigned several times. But of course, Joe Biden also came back and campaigned, and so he took it seriously and didn’t take Minnesota for granted.” 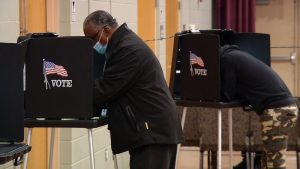 Schultz spoke to CCX News the day after the election.

He says another reason Biden won in Minnesota is because a greater percentage of the state’s voters reside in the Twin Cities metro, which is an area where Democrats have done traditionally well.

A return to divided state government

Meanwhile, the state legislature, is another matter altogether.

Schultz says the rest of the state tends to vote Republican, and the voter turnout for President Trump proved to be a big boost to GOP candidates further down the ballot.

Initial results show that the Minnesota Senate is on track to finish with Republicans keeping their 35 to 32 majority heading into the next session. That means we’ll have another two years of divided government.

“The consequences of the legislature being divided are huge,” Schultz said. :Going into next year then, or even later this year, but certainly into next year, this means that what, the governor’s authority on the coronavirus and the pandemic, he’ll keep doing what? Every month, another round of executive orders. This also impacts the issues of reapportionment, the budget next year, so it kind of guarantees a status quo in terms of Minnesota politics.”

Schultz says that a divided legislature also means that when state lawmakers draw new congressional lines next year, it will be hard for them to come to agreement, which means that we’re likely to see some court battles in the coming year.