In every neighborhood around the state, election season is almost over.

“I actually spend a lot of time looking at the numbers,” Schultz said. “What I’ll try to look at is, who’s won a district in the past, try to make some anticipations there.”

Determining how people are going to vote, however, is an inexact science. Looking at historical data is one thing, but now you have political parties endorsing candidates for offices traditionally considered to be nonpartisan, such as city council or school board seats. 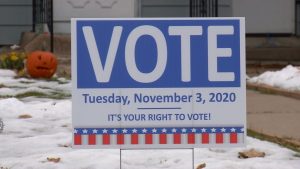 “We used to try to build some kind of firewalls in place to say that we’re going to create non-partisan positions, so that we wouldn’t let party politics get in the way,” Schultz said. “But what’s happened is, we’ve become so polarized. People have come to think of the world in terms of Democrat and Republican that we’re now even seeing organizations that don’t normally think about getting involved, feeling like they basically have to have an imprint. And part of it is because they want to influence public policy.”

Schultz says we are now in an era where many voters go straight down the line on their ballots. If they support the president, for example, they’ll vote for every candidate in the same political party.

“We used to have a more frequent era where people would split ticket vote,” Schultz said. “And so part of the strategy here now also by organizations, party organizations, endorsing further down is they’re hoping to what? Hoping to motivate people to show up to vote. Hoping to basically get people to make these choices for candidates, even at positions they might not normally vote on.”

There’s a lot at stake in this election, particularly when it comes to the Minnesota legislature.

Currently, Republicans control the Minnesota Senate by a margin of 35-32, but the DFL hopes to flip that.

“I think at the end of the day, the Democrats… have to win probably about four seats in the Senate, anticipating that they might lose at least one or two of their own,” Schultz said. “So it’s a very, very tough one. Not impossible. We saw two years ago the Democratic wave go through the suburbs, and put the Democrats back in control of the House. It is possible with the Senate.”

The outcome of the state legislative races could also have a lasting impact for years to come.

Next year, the state legislature has to redraw congressional lines, and Schultz predicts that Minnesota will lose a seat in Congress due to population shifts. The legislature would then have to determine which of Minnesota’s eight members of Congress don’t get to come back.