The produce section of a grocery store is a colorful cornucopia of food that’s on any dietitian’s list of things we should all eat.

“So many people don’t seem to either know how to make them or have the time to prepare them,” said George Abide, co-founder of Green Wagon Foods. “And maybe they just think they’re kind of boring.”

“Boring” is certainly one word that comes to mind when people think of fresh produce. Experts say that 90 percent of Americans don’t get the recommended amount of fruits and veggies in their diet.

But Abide and his business partner, Peter Erickson, are on a mission to change that. 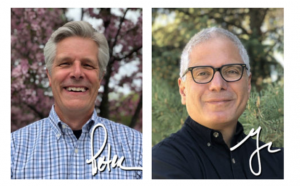 Peter Erickson and George Abide are the founders of Green Wagon Foods.

They once worked at General Mills, but they left and started their own company called Green Wagon Foods.

The first product of the Golden Valley-based company is called SteamMates, a vegetable-seasoning kit that comes in four flavors.

You provide the vegetables and cooking oil, and the product takes care of the taste. 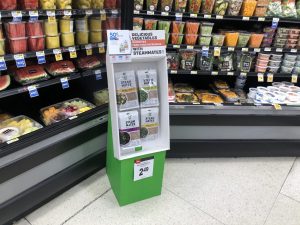 You can find SteamMates in the produce section of many CUB and Hy-Vee stores.

“The ability to mix and match flavors with different vegetables gives you a huge number of potential combinations, so you shouldn’t get bored with the flavor variety that we have,” Abide said.

The way that it works is fairly simple. SteamMates come with a paper bag and a bag of seasoning. All you have to do is open the paper bag, take the bag of seasoning and toss in, add vegetables, add a tablespoon of olive oil, fold up the bag and shake it up, then toss it in the microwave for about three and a half minutes.

When it’s all said and done, you have a delicious mixture of steamed vegetables.

“A lot of people are kind of skeptical,” Abide said. ‘”Gee can you really cook vegetables in a microwave in a paper bag and have them turn out well?’ But when we demonstrate the product and show them what the finished product looks like and give them the chance to taste it, they’re amazed, and really makes a believer out of them.”

Now, they want to make believers out of the average shopper.

SteamMates debuted earlier this year, and it’s now in close to a hundred stores around Minnesota between Cub Foods and Hy-Vee, with plans to expand well beyond the state’s borders.

“If we can play a small part in being able to increase the percentage of a consumer’s food consumption that’s plant-based, we think we’ve done a great job,” Erickson said.