Some of the Americans who helped Allied forces win victory live in the northwest metro including 93-year-old Dale Gerdin, a resident at Covenant Living in Golden Valley. 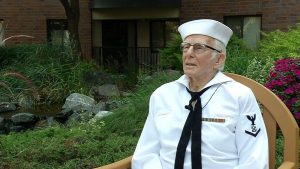 Dale Gerdin was 18 when he served as a U.S. Navy navigator yeoman. Yeomans perform various administrate duties on ships.

The veteran recalls being on a ship when Japan announced they would be surrendering. Gerdin was surrounded by 7,000 American soldiers who erupted in celebration.

Japan’s announcement to the U.S. came on August 14, but the official documents were signed on September 2nd, making the day V-J day.

But the victory over Japan couldn’t have happened without the women on the home front. 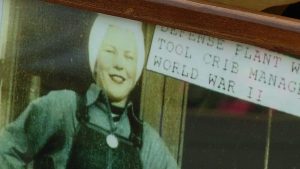 Barb Larson worked at a defense factory and was known as a “Rosie.”

Barb Larson, also a Covenant Living resident, worked in the defense factories that were located on the Minnesota State Fairgrounds. Larson explained that all females who worked in the factories were called “Rosies” after the popular caricature Rosie the Riveter.

Rosies delivered war supplies needed to defeat the enemy. Often times, females took over male jobs as they went into the military.

“The longer the war lasted and the more people that were gone, it was scary because we kept thinking, whose going to go next,” Larson said.

The 94-year-old remembers the eerie atmosphere as she walked the streets seeing no men. Eventually men came back to their families, but Larson said many kept quiet.

“We know very little about what they saw but they say ‘you don’t want to know’,” she said.

Gerdin too didn’t say much about what he saw, but one thing is clear, he was glad to be home.

“I thought well the war will probably last four years, so I better get use to what’s happening and I was delightfully surprised when it was over,” Gerdin said with a subtle smile.