Typically the weather needs to be below 10 degrees in order to build a good formation of ice.

Due to COVID-19, warming houses will not open of the 2020-21 skating season. In lieu of warming houses, the city will keep benches, picnic tables and portable toilets on site. 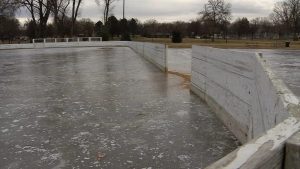 There’s no limit to he number of skaters but the city is asking residents to maintain 6 feet apart unless they’re from the same household.

“We’ve been getting a lot of phone calls and interest in the public,” said Golden Valley Recreational Supervisor Brian Erickson. “I think people are itching for something to do and get outside and experience Winter. To be around people in a socially distant way and enjoy the ice in the winter.”

Erickson said there’s usually about 20,000 visitors that come to all 10 ice rinks in Golden Valley. Skating rinks are typically ready by late December and are cleaned and resurface Monday through Friday.

Golden Valley usually closes its ice rinks for the season in mid-February.

With most outdoor rinks still closed, the Maple Grove Central Park Ice Skating Loop officially opened right after Thanksgiving. The skating loop is able to open because it’s refrigerated, but you do need reservations to skate.