Winter hasn’t quite arrived yet in Minnesota, but when you have a refrigerated ice loop that’s 810 feet long, it’s no surprise that people looking for ways to entertain themselves outside are getting at least one winter activity started a little early this year.

“I like how it’s always nice and soft usually, and there’s a lot of big area to skate around,” said Summer Huddleston, who was out at the Central Park Ice Skating Loop in Maple Grove Thursday morning with friends and family.

“With the way the world is these days, [people] were looking for things to do, so this is nice that we’re up and running,” said Jeanne Vestal, the Central Park facility manager.

With indoor rinks closed due to government restrictions — and most outdoor rinks closed because it’s not cold enough yet — seeing the skating loop open has been refreshing for kids doing distance learning and want to reunite with their friends.

“We don’t get to see other that much,” Huddleston said.

As well as for people who consider ice skating as a passion.

“Usually I coach figure skating six to seven days a week, so not being able to skate with the pause, this is definitely a go-to,” said Mandy Pirich, the Maple Grove skating director.

However, city officials don’t want it to be too much of a go-to, for the sake of trying to maintain social distancing guidelines.

Prior to the pandemic, there were times when the skating loop would be jam packed.

In a normal year, the Maple Grove Skating Loop would get roughly 20,000 visitors. But they’re planning to limit that this year to help prevent the spread of COVID-19.

“A lot of people relied on our rental skates, so without having those, your person that doesn’t normally skate isn’t going to go out and buy skates just to go skating once on the loop,” Vestal said. 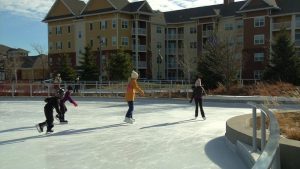 The Central Park skating loop in Maple Grove gets roughly 20,000 visitors a season.

Aside from making rental skates unavailable, Maple Grove has also closed the concession stand and the warming house until the state says the city can reopen them. Park managers are also hoping to limit the number of skaters on the ice at one time to 70.

“There’s 810 feet of trail, so that can space people out, and people have been good about keeping their distance,” Vestal said.

The plan is to add staff if they need to regulate the number of skaters on the ice, but they’ll cross that bridge when they get there.

For now, skaters are just happy to have the loop open.

“Cause we get to go out and we get to be in nature,” Huddleston said.