Golden Valley residents will soon have what’s described as a “destination” public art display to enjoy and interact with by the end of the year.

The Golden Valley City Council approved plans July 21 for an art installation on the ground level of the 10 West End office building and parking ramp that’s under construction along I-394 and Highway 100 where Golden Valley and St. Louis Park intersect.

An artist’s rendering of the art installation.

The art will feature the word, “WE,” in 12-foot, three-dimensional letters. Benches on either side of the letters will spell out “Golden Valley” and “Saint Louis Park.”

The WE sculpture will act as the focal point. Committee members who worked on the design say that the WE piece represents togetherness as a community and the partnership between Golden Valley and St. Louis Park. The letters also happen to be an acronym for West End.

“We were very surprised and very pleased with the final result of it,” said John Kluchka, one of the artists on the Public Art Committee. “It was not like something we were necessarily expecting, but in a very, very good way. It was very much focused on being a destination, it had a huge amount of, not only dimensional but tactile components to it. You’re able to sit on it as not only just a sculpture, but also as a place to hang out.”

A Change from Original Concept

The design team’s original idea was to have the art installed on the parking ramp and take the form of a tower, but that idea soon changed. 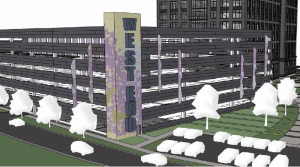 An artist’s rendering of the original concept of the art on the parking ramp. Planners changed this idea to the current ground-level plan.

“We thought, well this is going to look great for a drone that’s flying over the highway, and it might look great for a person who can see it for three seconds as they drive past it, but what about the people who actually live there,” Kluchka said about the original concept.

Builders will construct the art out of steel and aluminum. It will also feature a lilac pattern to acknowledge the area’s history as Lilac Way. The developer of the property is investing $150,000 for the art project.

“You kind of feel like it’s part of the community and not just something that’s up on a building,” said Golden Valley Council Member Kimberly Sanberg during the July 21 meeting. “I think this is really cool, and I applaud all of you [on the committee] for your roles that you played in coming up with this idea. I think it’s a great concept.”

The plan is to install the art this fall and host a grand opening event in the spring.