The Brooklyn Park Economic Development Authority (EDA) was split on whether to demolish the old Brooklyn Park Library, which the city purchased from Hennepin County earlier this year. With a 3-3 vote, the motion to demolish failed. But the matter is sure to come up again because the future of the building remains uncertain.

Some members mentioned community groups would be willing to pay for repairs in order to lease, but not own, the building.

“I’ve been approached by at least two groups who would like to utilize the space for community programming activities, how best can we accommodate them,” said EDA member Wynfred Russell.  “I think it would be a waste if we were to demolish this space.”

But numbers produced by the city show there would have to be considerable money invested into the building for it to be used regularly. Repair for interim use would be $15,000, but long-term use would top $700,000 for repairs, like replacing the roof, boiler system and more. Would groups be willing to spend that much money to rehab a space they couldn’t own?

“I don’t want to see anyone go in there and be asked to leave once they’ve been asked to spend a lot of money,” said EDA member Tonja West-Hafner. “That’s not fair or equitable either.”

The Brooklyn Park EDA approved purchasing the library building at 8600 Zane for $400,000 in April. The city had an interest in the property because it connects to the Brooklyn Park Community Activity Center and could provide space for a possible expansion. EDA members agreed they did not favor selling the property. 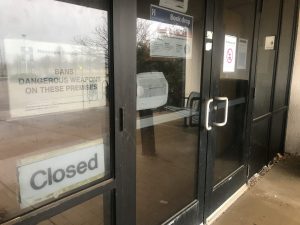 Costs to demolish the old Brooklyn Park Library are $128,500. Staff say there’s not much left inside to salvage.

“While I have also heard from people who have big dreams for that building, I don’t necessarily believe we should put the health of community members in any type of danger for being in that building,” said EDA member Lisa Jacobson. “It is not safe in its present state.”

EDA member Mark Mata expressed concern that the numbers estimated to bring the building up to code were not accurate. There was a motion to table the vote until April while the city gathered a list of more precise cost estimates and scheduled a tour of the building for members, but that too failed to get a majority of votes.