Every day, hundreds of people looking to take their driving test make their way to the West Metro Exam Station in Plymouth.

The goal is to pass and get their driver’s license. But getting an appointment to take the test is no easy task.

“I have a daughter taking the driver’s test,” said Tiffini Kramer, a parent, while waiting at the West Metro Exam Station. “I tried to make a reservation like, decades ago to get in, and we couldn’t even get in on her birthday.”

“Decades” is a bit of an exaggeration, but officials from the Minnesota Department of Vehicle Services (DVS) say she’s not alone when it comes to having a difficult time trying to book an appointment.

“Appointments are getting scooped up as soon as they become available,” said Pong Xiong, the DVS director.

He says the demand for driver’s exams in the metro exceeds what they’re able to offer.

“The bottom line is, it comes down to people,” Xiong said. “We need more examiners to produce more exams and that’s going to be a budget item, a budget request that needs to be fulfilled if we’re gonna see this capacity increase.”

DVS currently has 15 open positions out of 200, but the openings only tell part of the story. 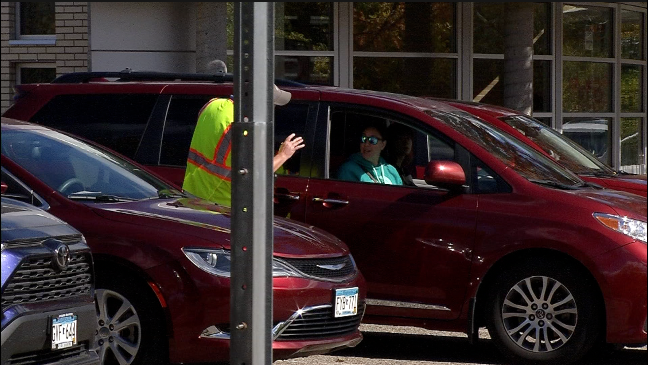 Cars lined up to take the driver’s exam at the West Metro Exam Station in Plymouth.

To meet the customer demand, Xiong says they need a budget increase of between $8 to $10 million. Ideally, he would want staffing levels of around 275 to 300 people.

Fulfilling that request is up to the state legislature.

“I will be an advocate for it and I will push for it,” Xiong said.

In the meantime, parents will cross their fingers and hope that their children can pass the test on the first try.

Meanwhile, exam stations in the metro area now have appointments available seven days a week to accommodate people who can’t make it to exams during the week. However, they didn’t add additional staff members to cover those weekend shifts.