Despite Governor Tim Walz ordering a 7 p.m. curfew on Monday, crowds protested outside of the Brooklyn Center police station on Humboldt Avenue after the deadline.

At some point Monday evening, people broke the glass and looted the nearby Dollar Tree store. The fire department responded to a call of smoke inside the building. 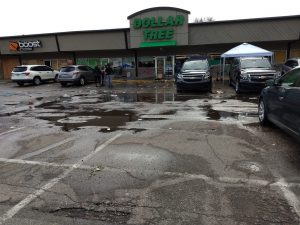 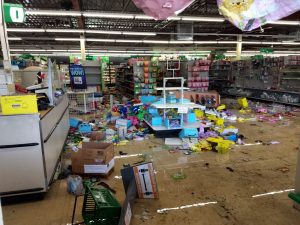 Looters destroyed in the interior of the Dollar Tree on Humboldt Ave. 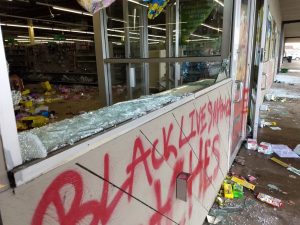 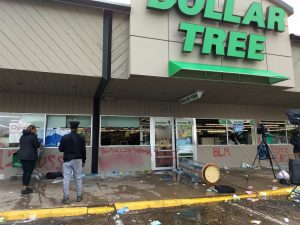 Broken windows and graffiti now mark the Dollar Tree on Humboldt Ave. Trash and debris were also seen everywhere in the area after a second night of rioting and looting late Monday. On Sunday night, looters targeted much of the Shingle Creek Crossing businesses.

CCX News counts more than 35 business in Brooklyn Center that were damaged. Those who were not involved were left to pick up the pieces.

“It makes me mad that this happened,” said Chris, a north Minneapolis resident, who did not want to give his last name. “I’m not happy about it. I just want to help, get this place back together and it makes me sick seeing all of this.”

The strip mall, where Dollar Tree is located, is covered in spray paint. Most neighboring businesses are boarded up with plywood. Businesses that weren’t targeted have also taken safety measures.

As volunteers like Chris continue to clean up the mess, they plead with rioters to stop the destruction.

“I believe in protest but rioting and looting is horrible,” he said. “I mean look at this, it’s horrible. They destroyed someone’s company that had nothing to do with it.”