The Brooklyn Center City Council took a closer look at crime concerns and zoning issues as city leaders weighed in on a license renewal for the Radisson Hotel Brooklyn Center.

The 174-room hotel, located at 2200 Freeway Boulevard, has seen a dramatic drop in revenue due to fewer travelers caused by the COVID-19 pandemic. Complicating matters, the hotel agreed to a contract with the state of Minnesota to take in people who became homeless to help recoup a little revenue. However, that is considered a violation of city zoning and licensing rules.

City officials also took notice of the Radisson when the hotel hadn’t paid its lodging tax and utility bills for several months. The hotel was also operating with an expired license. The utility payments and licensing issue turned out to be a misunderstanding as the hotel came under new ownership last year.

But what has the city even more concerned is the alarming number of police calls to the hotel over the summer. From June through August, police were called 204 times to the hotel property, a 716% increase over that same time period last year.

Ownership and management at the Radisson Hotel attended a virtual city council meeting on Monday, Oct. 12, to go over the problems.

Nupen Patel with K & K Hotel Group took over ownership of Radisson Hotel Brooklyn Center in March 2019. Patel apologized to the city for failure to renew the hotel’s hospitality accommodation license on time saying he was unaware of it and his group was “new for the area.” He said billing for utilities went to a third-party management company and that issue has been resolved too.

As far as crime, Patel says the security issues have been fixed. City officials acknowledge improvement.

“The way conditions are today at the property compared to way the conditions were four, six, eight weeks ago, I think everyone would say there’s been a dramatic improvement,” said Brooklyn Center City Manager Curt Boganey at Monday’s meeting.

Patel also mentioned that the Brooklyn Center hotel usually makes $500,000 a month. But that has changed significantly, he said.

“We’re nowhere close to that,” said Patel, who says sharp revenue declines were the reason the hotel couldn’t immediately pay its lodging tax. Patel also says his property taxes for the Brooklyn Center property are $350,000 a year. And the hotel won’t be able to eclipse that in revenue. 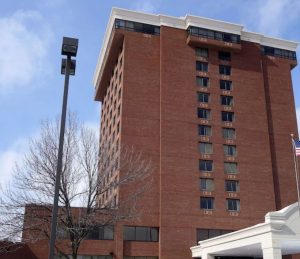 One unresolved issue is the hotel taking in guests for extended periods of time. City officials say Radisson management was using the facility as a homeless shelter, in violation of zoning and licensing ordinance.

It turns out the hotel was operating under a contract with the state to help people who are homeless. A third-party nonprofit, 2ndChanceProject, has been working for the past week to help people find a better housing solution.

According to hotel management, 67 rooms were booked at most with 82 guests and families this summer due to the state contract.

“We don’t ask our guests if they’re homeless or not or what they do,” said Patel.

The number of longer-stay guests has since fallen to 31, according to city officials, with stays ranging from a week to two months.

“The third-party provider right now is working really hard and diligently to make sure the clients are getting housed,” said Cameron Corrigan, general manager of Radisson Hotel Brooklyn Center.

The Radisson Hotel is licensed as a limited-stay hotel, but council members agreed to provide regulatory flexibility for longer-stay guests because of the current economic crisis and the pandemic. The city council also offered to renew the hotel’s hospitality accommodation license with conditions.

Those conditions, as proposed by Brooklyn Center City Council member April Graves, include no more than 50 rooms for longer-stay guests and the hotel’s homeless shelter lease with the state shall last no longer than 90 days past the end of Governor Tim Walz’s peacetime emergency declaration. The hotel also agrees to regular meetings and inspections by city staff.

Most council members agreed with the proposal. Brooklyn Center Mayor Mike Elliott was one exception. Elliott supported the license renewal but did not support having a room limit.

City staff felt having a room limit was important because it better ensured that Minnesota Second Chance Coalition could adequately handle the needs of those in need of housing. Boganey said a previous third party provider ran into problems by taking into too many guests that led to the alarming number of police calls over the summer.

“The previous provider in our view was functioning beyond their capacity,” said Boganey. “We think that added significantly to the conditions that existed on the property.”

“It also falls on the hotel, which is not designed to be a homeless shelter,” said Brooklyn Center City Council member Dan Ryan.

CORRECTION: This version corrects the name of the current third-party provider helping long-stay guests at the Radisson Hotel. The name of the provider is 2ndChanceProject, an earlier version incorrectly listed the provider as Minnesota Second Chance Coalition.