“Our kids are idle and they’re getting into problems,” Bishop Harding Smith of Minnesota Acts Now said to the crowd.

This is an event that’s taking place nearly two weeks after the shooting death of former Park Center student Syoka Siko, whose mother was in attendance.

“Your voice is important. We are seeing things we’ve never seen before,” said Brooklyn Park Mayor Lisa Jacobson. “Many of us never heard of a ghost gun before. Syoka was murdered by ghost guns. And so to honor him, we must begin this conversation.” 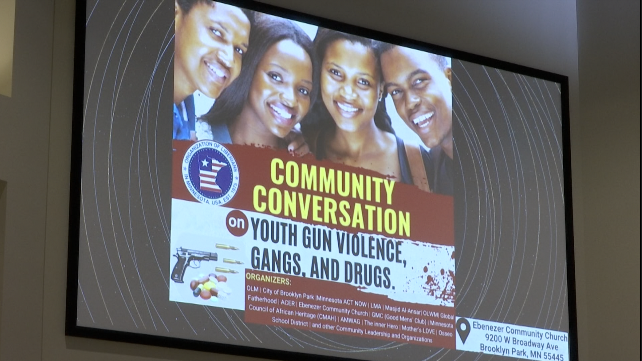 This is one of several events organizers hope to have regarding youth gun violence in Brooklyn Park.

The organizers put together a panel of teenagers, mental health providers, and law enforcement officials, among others.

The participants discussed some of the causes of gun violence, such as drugs sales, or the influence of popular music where guns are glorified.

“What are some of the reasons for the gun violence? The No. 1 would be marijuana sales,” said Brooklyn Park Police Chief Mark Bruley. “The right to sell it, or some sort of bad deal that somebody got ripped off and they owed them money.”

“All they know is what they hear from their friends,” said Dr. Aja King, a counseling psychologist. “From the TV, from the movies, from the music.”

Another topic discussed Thursday night included the reasons why youth are drawn to gangs.

“One of the main causes is that they feel disconnected,” said Ambrose R. Russell, founder and president at The Inner Hero.

“We are working with young adults who are trying to find their own voice,” Dr. King added. “They are searching high and low for their identity. Gangs provide identity.”

While there are no easy answers, one of the key messages for people at the event was to try to be good mentors and role models.

“Let’s band together,” Mayor Jacobson said. “It’s not about any one of us. It’s about all of us.”