Police officer shortages have become a hot topic in cities across the country. It’s also an issue in Golden Valley.

The city budgeted for 33 full-time sworn officers in 2020. The Golden Valley City Council reduced that number to 31 in the 2021 budget. The city opted to replace those sworn officers with two full-time community resource officer positions.

In next year’s budget, the city council is proposing to go down to 30 sworn officers by eliminating a school resource officer position.

There are also police officer job vacancies. But those numbers differ depending on whom you ask.

The Golden Valley Police Department is in transition with a new interim police chief. A vigorous hiring process is also underway to make up for those vacancies.

Officials with Law Enforcement Labor Services say the Golden Valley Police Department is currently down to 23 sworn officers out of 31 positions.

“If you look at how many officers they are down right now, it would be comparable to Minneapolis, to Brooklyn Center,” said Jim Mortenson, executive director of Law Enforcement Labor Services. “There are three more officers that are in the pipeline to go to other agencies.”

Both the police union and city leaders say there are a variety of reasons for the shortage. Those include retirements, medical leave and departures to other police agencies. Mayor Harris says staff numbers have changed over the years with a shift in positions.

Community resource officers are not licensed. Mortenson says some licensed officers are leaving because they are unhappy with how the city is running things.

“They’re leaving because there are just some issues going on within the organization that they’re having with the city administration,” said Mortenson.

When asked to elaborate, Mortenson said he couldn’t go into further detail.

“We’re going through some changes and people don’t normally like change, and these are tough conversations that we’re having to have, especially because of COVID and especially what happened last year with George Floyd’s murder,” said Harris. “We’re having to rebuild relationships.”

The city council also voted to replace the Civil Service Commission with a new peace commission, in part, to streamline the hiring process.

“We’re responding to what we’re hearing in the community and the changing needs of public safety,” said Harris. 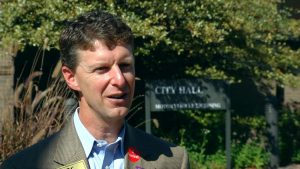