April 1 wasn’t just Fools Day, it was also Census Day. The Census Bureau is working to determine accurate population counts as of April 1. So far, just over 36 percent of households nationwide have responded to the Census, but there’s still time to respond, which is especially important because COVID-19 is causing disruptions in the normal census-taking process.

Households that haven’t filled out the online Census form or by phone will get a paper questionnaire to fill out. That should arrive by April 16. Ordinarily census takers would pay in-person visits to households that haven’t responded, but because of the coronavirus, that’s been suspended until at least April 15. 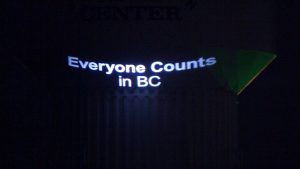 The forced delay has some cities worried about larger under-counts than usual. Before the COVID-19 outbreak, Brooklyn Center was already anticipating an under-count of more than 7,000 people. That prompted city officials to project Census awareness messages on a city water tower, and an apartment building next to City Hall. They planned for concerted efforts to raise awareness, including face-to-face campaigning. Now officials are left to wonder if the coronavirus will drive the projected under-count higher.

“I certainly hope not,” said Community Engagement Manager Angel Smith. “COVID-19 does create additional barriers but we are still trying to do everything we can to make sure it doesn’t impose any additional issues for us.”

The city held a meeting Thursday to discuss the census situation. “We’re going to try and see what additional efforts we can do to make sure that we’re keeping our distance, ” said Smith, “but we are still adequately supplying our residents with the needed content for Census awareness.” Smith exited the meeting suspecting that 7,000-plus-person under-count could very well go up because of COVID-19.

“I don’t doubt there would be some increases in those numbers,” she said. “Because that face to face interaction was one of our stronger points.” Still, the city soldiers on. Having dropped the face-to-face awareness campaign, Smith says it will concentrate on other channels – some of which might be made easier thanks to the governor’s stay-at-home order. “Because everyone is at home right now we know we can utilize other methods of getting information to them,” said Smith.

Smith mentioned  programs like direct mailings, email, social media campaigns, and even possibly phone trees to help get the message out. “We’re trying to think outside the box, yet still remain safe.”

New Hope’s Community Development Specialist Jeff Alger says his city has a high number of “traditionally under-counted” properties, meaning rentals. The city joined many others in the northwest metro in passing an ordinance mandating that census workers be allowed access to rental properties. But now, with a COVID-19 question as to whether there will actually be any census workers visiting properties, that ordinance might not matter for this census.

“Things are kind of up in the air as to how they’re going to handle people who don’t respond (to the Census),” says Alger. “We’ll have to see what happens.”

The city and its Complete Count Committee are working on outreach efforts, such as yard signs reminding people to respond to the Census, that don’t require face-to-face contact.

Meanwhile in Plymouth, Administrative Services Director Laurie Hokkanen is working to get the word out as well. “It’s so important because the Census drives a couple of things policy-related,” said Hokkanen. “A big one of those is funding. So for each person who gets missed, it’s about $28,000 in funding.”  She adds that if they’re missed, the under-count impacts the city for a decade.

Under-counts, says Hokkanen, mean the city has “more people to serve than you’ve received funding for. And if we can get everybody counted, that helps to eliminate that gap.”

For more stories on COVID-19’s impact on our community, click here.