It’s census season, and Brooklyn Center is looking to reduce the number of people not counted.

“The city of Brooklyn Center has a projected under-count of more than 7,000,” said Communications Manager Angel Smith. “That’s about a quarter of our population. That’s a big number.”

Census data directly impacts public funding, so people missed by the census means dollars missed by the city. In an effort to make sure everyone gets counted, Brooklyn Center is spreading the word. They are projecting messages on an apartment building near City Hall and the water tower off Highway 100. It’s a program they’re calling Green Lights. 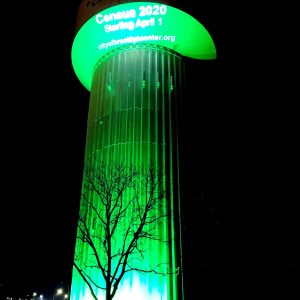 The messages, in several languages, say “everyone counts,” and remind people that the census starts next month. The city is also letting residents participate in. You can pick up a green LED bulb  at city hall to put in a lamp at home to show support.

And the unique census awareness program has caught the attention of neighboring governments, some of which are expressing interest in running similar awareness campaigns in their cities.