Campers Flock to Plymouth for ‘Adventures in Cardboard’

At French Regional Park in Plymouth, recreation is usually the big draw.

But for dozens of kids, they come to the park five days a week for a sense of adventure and camaraderie centered entirely around cardboard.

“We have many characters about, there may be a few ‘assassins’ around. You never know who may be there,” said Eric Uttormark, a staff member from Adventures in Cardboard summer camp.

Uttormark is a former camp participant who now goes by the name of ‘Thor’ while he’s on the job.

“I am the one representative from Asgard, until we get more,” he said. 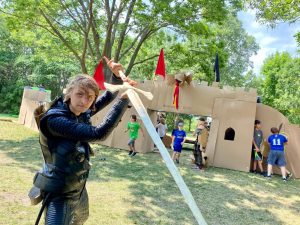 Eric Uttormark (a.k.a. Thor) is one of the staff members with Adventures in Cardboard.

Adventures in Cardboard is a summer day camp that’s described as a mixture of capture the flag and Dungeons and Dragons.

“It may seem like a bit of chaos,” Uttormark said of the camp. “But overall, it’s organized chaos, I assure you.”

At this Plymouth campsite, the castle, the armor and all of the weapons are made entirely from cardboard.

“So big swords, big axes, kind of cartoon-ish sort of shapes,” said Ramon Cordes, a coordinator from Adventures in Cardboard. “So it’s almost, the more intimidating the better.”

Yet while the weapons are intimidating, the camp itself is anything but. It’s a place where the kids can exercise their creativity, and basically just be kids.

“Originally, my parents signed me up as a camper, and I was very hesitant at first,” Uttormark said. “Didn’t really want to do it. I was 16 at the time, not very happy. But I came here and I loved it. It was absolutely amazing.”

Amazing because of the sense of community that the campers build with one another as they let their imaginations run wild.

“Here’s a blank canvass, let’s see what you can do,” Cordes said.

Adventures in Cardboard has sites set up at four different parks throughout the metro area. Tuition is $425 for the week. 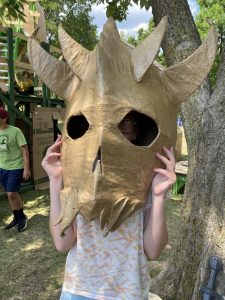 A camper shows off her cardboard dragon mask.