There remains a place in the world for traditional greeting cards. But a Plymouth man has developed an app that he believes can be a powerful alternative.

“I was thinking video was hot and it would be a great way if these cards be more interactive and more authentic,” said Jamie Page, founder of RexVid.

Page came up his idea for RexVid in the wee hours of the morning.

“I had the idea literally at 1:28 a.m. one morning. I was laying in bed, just thinking about different things, and this idea came to me. And I poked Lisa and said ‘gosh I got an idea. And she’s like ‘no don’t tell me your idea right now,'” Page recalled.

Not all of Jamie’s ideas worked with his wife. But this one did.

RexVid is free app that makes it easy for you to collaborate with friends and family to create a one-of-a-kind video for any occasion. The app stitches together short 10-second videos that you can send at a time of your choice. After months of research, Page discovered there really wasn’t an app like it.

“I definitely spent hours researching it before I spent one dime on this darn thing,” said Page, a self-described techie and owner of a software development company. “I could not find anything close in the marketplace that was the same capabilities as RexVid.”

Building an app is one thing. Naming it is another.

“I started Googling everything and to find a website that’s available, a dotcom, as well as business name, it’s virtually impossible.” said Page.

That’s where Rex the dog came in.

“And so Lisa came by and our dog’s name is Rex and so she said ‘you should call it RexVid,'” remembered Page. “And I said ‘there’s no way I’m naming our first app Rex after the dog,’ and anyways, long story short, she was right. RexVid was available.”

Soon after the name, a slogan sprung. The name Rex means king, leading Page to come up a motto for his app, ‘Treat ’em Like Royalty.’

Page and his wife made a RexVid congratulating their son on a new job. It turns out it would be the last video Page’s wife would be able to make.

“Tragically on June 21, she had a brain aneurysm and collapsed,” said Page.

His wife was walking their dog at Zachary Park in Plymouth. She passed away the next day.

“It made the power of the RexVid that much more special to my son and for our entire family. Because he’s got his mom saying ‘hey congratulations, we love you lots. And three weeks later that became priceless,” said Page. 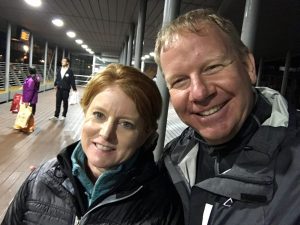 Page took a break from RexVid after his wife’s passing in June. Today, the RexVid app is available for Apple and Android phones. Page formed a separate company for the app and has invested six figures into it after obtaining all the necessary legal licensing and copyrights.

“It transformed from being just a fun project, to now we’re running a real business. Right now we’ve got investors, and now it’s got a different urgency and a different pressure.”

So far, like many app developers, he hasn’t made any money off of it yet, but hopes to eventually do so. Page is also working on adding different features to the app.

“There’s a bunch of ideas. We have a whole development roadmap of things we want to do in the future,” said Page.