A new pizza concept has arrived in Maple Grove. It’s not only a new concept for the northwest suburbs, but a new concept nationally. Pizza Karma, which opened in early December, brings global personality to pizza. 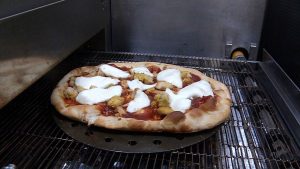 Iyer has traveled the world and authored several books on food. He didn’t hesitate when asked about his favorite food.

“Pizza and the other one is potatoes,” laughed Iyer. “I have a potato pizza on the menu.”

Pizza Karma uses naan dough that’s placed along the side of a large clay oven, also called a tandoor.

“The inside of the oven makes it extremely unique in a way,” said Iyer. “It can go up 700 to 800 degrees Fahrenheit.”

Iyer says 80 percent of the world uses clay ovens for cooking. Once the naan is placed inside, it starts to bubble, an indication the temperature is just right.

“The goal is to cook it three-quarters of the way,” Iyer said.

The crust is actually peeled out from the inside of the oven using a couple special tools. Once it’s out, it’s ready for toppings.

Flavors Popular from Around the World

The toppings are all flavored with different spices because to me that’s what I’m really about. Call me the ‘spice guy,'” said Iyer.

Once the toppings are ready, the pizza is cooked a second time using a pizza oven. Assistant head chef Jmar George trained under Iyer to master the concept.

“The first impression that you get from the customer when they come up to you, they’d be like ‘great food,'” said George. “And after that they may be like, ‘how do you guys make this?'”

For Iyer it’s a concept he hopes to expand nationally.

“People have really loved coming here and sampling something that is very different,” he said. “You may not speak any other language, but you do speak the language of food.”

Besides Maple Grove, there is a Pizza Karma location in Eden Prairie. Besides opening restaurants Iyer is working on a seventh book titled, “The Master of all Curries: 50 Essential Curries from around the World.”