A police pursuit that started in Brooklyn Park ended with a vehicle fire on Highway 100 and a suspect arrested.

MnDOT video shows the aftermath of the pursuit at Highway 100 and Duluth Street in Golden Valley.

Brooklyn Park police say the vehicle the suspect was driving was stolen and was seen in the area of two shots-fired cases in Brooklyn Park. Officers initially responded at about 5:50 a.m. to 911 reports of multiple shots fired on the 1500 block of 89th Avenue N. Police found evidence of gunfire that struck a home with people inside.

Officers later learned a suspicious vehicle that sped away from the first shooting was discovered on the 8400 block of Riverview Lane N. Police determined the suspect had also fired shots in this area, damaging a vehicle. No one was injured in either shooting incident.

Police came across the suspicious vehicle and tried to stop the driver, but the man continued to speed away. The pursuit continued onto Highway 100, where police used PIT maneuver to get the vehicle to stop. The vehicle caught fire, creating a smoky scene. The suspect got out of the vehicle with his hands up and was arrested without incident.

After the fire was put out, police recovered a gun from the stolen vehicle. Officers also learned the vehicle had been stolen from a Brooklyn Park residence where a vehicle was left unattended with the keys inside.

The suspect is a 19-year-old Brooklyn Park man. Multiple felony charges against him are pending. 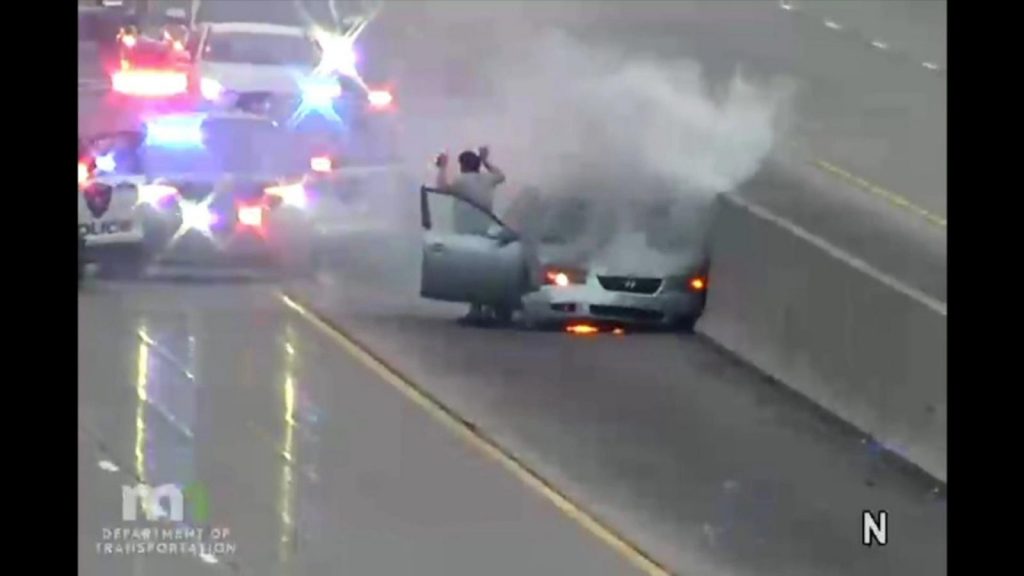