A 19-year-old Brooklyn Park man is among two people charged in the arson of a St. Paul health and nutrition store. Samuel Frey, 19, of Brooklyn Park, and Bailey Baldus, 19, of Ramsey, are each charged with one count of conspiracy to commit arson. U.S. Attorney Erica MacDonald announced the charges Tuesday. 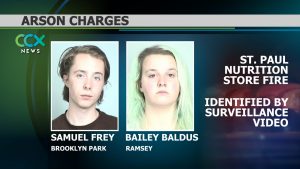 According to the federal complaints, investigators with the U.S. Bureau of Alcohol, Tobacco, Firearms and Explosives (ATF) identified Frey and Baldus using video surveillance footage. The complaint says Frey could be seen pouring flammable hand sanitizer onto a shelving unit before lighting it on fire. The ATF also received multiple anonymous tips to help identify the suspects.

The arson occurred Thursday night, May 28, at Great Health Nutrition at University and Hamline Avenues North. Dozens of business fires were reported following the May 25 death of George Floyd that involved a Minneapolis police officer.

Both suspects made their first court appearance Tuesday before Magistrate Judge Hildy Bowbeer in U.S. District Court in St. Paul.

The ATF and FBI says anyone can report anonymous tips of suspected arson and destructive acts from the recent civil unrest by calling 1-888-ATF-TIPS (1-888-283-8477), email ATFTips@atf.gov or through the website ReportIt.com. In addition to fires, the FBI is looking for people who may have incited or promoted violence of any kind. Anyone with digital material or tips can call 1-800-CALLFBI (800-225-5324) or submit images or videos at FBI.gov/violence.