Class was in session this week at the Brooklyn Park Fire Department. The topic on Wednesday’s agenda was how to handle a Mayday situation while firefighters are out on a call.

“Have any of you been involved in a Mayday before,” Brooklyn Park Battalion Chief Rob Miller asked the class.

It’s a critical lesson for the students taking this class, but the group didn’t just consist of regular firefighters. 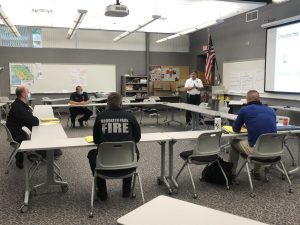 “So we’re putting them through a two-week Fire Captain Academy to really give them a solid foundation as they move out into the streets and into their new roles as company officers and leaders in the fire service,” said Jovan Palmieri, Brooklyn Park’s Deputy Fire Chief.

The Brooklyn Park Fire Department is transitioning to a full-time model. To help with that transition, they promoted two firefighters from within the department and hired one external candidate to serve in new leadership roles.

Alex St. Martin is one of the new captains.

“I was one of the first 18 full-timers, and I’m one of the first three captains, and it’s an absolute honor,” St. Martin said. “I’m very, very humbled and excited for the opportunities and the growth of our department and our city.”

St. Martin is one of 60 people to apply for the three captain positions. It’s a job that not only requires them to have responsibilities such as how to fight fires and perform emergency medical services, but also take on administrative duties.

“It’s a lot to know,” St. Martin added. “But the academy is doing a really good job of laying out our expectations and how to do our jobs.”

The promotion represents a progression for these career firefighters, and what they learn in this Fire Captain Academy will help shape the future of the department for years to come.

“We’re doing a lot of good things right now and it’s fun to be a part of that growth and taking our department in the right direction,” St. Martin said.

The Fire Captain Academy concludes this week with a badge pinning ceremony on Sept. 11. The new captains will then help lead the fire cadet program that begins next month, in which they’ll help train seven new Brooklyn Park firefighters.