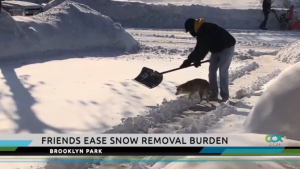 He doesn’t own a snowblower, so after every major snowfall, he has to shovel his massive driveway.

Park Center High School Tennis Coach, Ya Yang, is an old fraternity brother from their days at the University of Minnesota. He saw the Facebook posts, and launched an effort to buy the Austin family a snowblower.

This past weekend, Yang reached his fundraising goal and presented Austin with the snowblower.

It required some assembly, and Yang was kind enough to take care of that as well.

Now, Austin just has to learn how to use the snowblower.