The first meeting of the year for the Brooklyn Park City Council kicked off with the swearing in of a new council member and two returning council members. 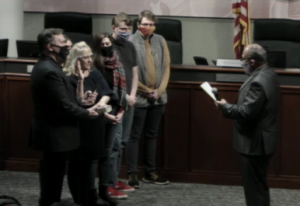 Lisa Jacobson took the oath of office for her second term representing the East District on the Brooklyn Park City Council. Jacobson has a background in the nonprofit sector.

Lisa Jacobson and Susan Pha were both re-elected in November and were sworn in with their families by their side. It is the second term for both council members. 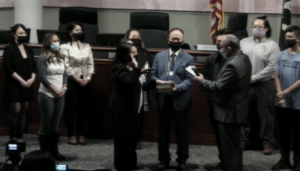 Susan Pha took the oath for her second term of office, representing the West District. Pha is an author and small business owner.

Boyd Morson is the new face on the city council. He won election to represent the Central District and also was flanked by family members during his oath.  Morson is a veteran.

Approving a resolution calling for a special election to fill the office of mayor was also on the agenda. Jeffrey Lunde submitted his resignation in December, after winning the District 1 seat on the Hennepin County Board of Commissioners. The council accepted the resignation and declared a vacancy on Jan. 3.

Because more than 365 days or more remain in Lunde’s term, the city charter calls for city council to order a special election to fill the rest of the term.