Lauren Boyd had big plans to celebrate the 7th birthday of her son, Isaac. On April 2, Isaac and his friends were supposed to go to Twin City Twisters, an artistic gymnastics venue in Champlin.

But when the COVID-19 virus forced the governor to shut down entertainment venues, Lauren had to make other plans.

“He was quite bummed about that, so I was trying to figure out how we could make the day special without really being able to do anything,” Lauren said. 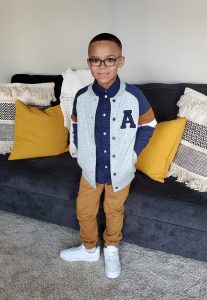 Isaac Boyd is a 1st grader at Edinbrook Elementary School.

The governor’s executive order for all Minnesotans to stay at home until April 10 made the task even more difficult. So Lauren made an executive decision of her own to celebrate Isaac’s birthday six days early on Friday, March 27th before the stay at home order went into effect.

A Birthday Parade for Isaac

In this era of social distancing, Lauren thought the most appropriate way to make the day special for Isaac would be to have family members, and Isaac’s classmates from Edinbrook Elementary, do a drive-by birthday parade at their Brooklyn Park home.

Lauren then contacted Isaac’s first grade teacher, Shawna Voigt, and asked her to email the parents of Isaac’s classmates.

“I had no problem sharing out the information with the parents in hopes that some of the students would show up,” Voigt said. “Because I know that the students really miss each other, and if it takes driving by and waving at a birthday boy to see each other’s faces, even from afar, I know that’s really important.”

With everyone contacted, the plans were set in motion to surprise Isaac at 6 p.m. on Friday. 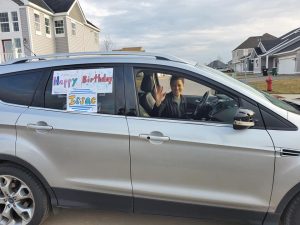 Shawna Voigt takes part in the parade for Isaac Boyd.

When Isaac looked outside, there was no Lamborghini. Instead, he saw a dozen cars filled with family members, classmates, and Ms. Voigt. They honked their horns. They waved. And they held up signs, wishing him a happy birthday.

One of Lauren’s friends led the way dressed in a T-Rex costume, because that’s what you do to make a child happy when a pandemic changes every other aspect of normal life. 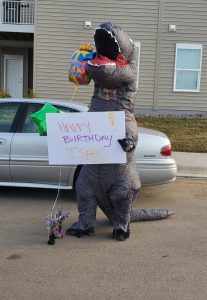 A T-Rex made an appearance at the Isaac Boyd birthday parade.

“I thought it was great for [Lauren] to come up with something to celebrate him in this crisis or challenge that we’re facing, so that he still felt celebrated and appreciated,” Voigt said. “So I thought that was really great.”

At first, Isaac wasn’t sure how to process the scene unfolding in front of him.

“Isaac’s normal reaction when he’s overwhelmed and super excited is to get actually very quiet and shy,” Lauren said. “So he kind of stood there very stunned for a while. And then he kind of realized that friends were passing by and waving and honking their horns and stuff. Toward the end he was more amped up and a little bit excited.”

Lauren estimates that 35 people participated in the parade, which lasted about 15 minutes.

“Of course, he asked afterwards, where was his birthday cake? And I told him that we would celebrate on his actual birthday with a cake,” she said.

It’s anybody’s guess as to when “normal life” will resume, but for one evening on March 27th, none of that mattered to Isaac Boyd.

“When we got settled down back home, he said that this was the best day ever,” Lauren said.