After three months of helping to lead police reform efforts in Brooklyn Center, the city will have to find a new manager for its Public Safety Implementation Committee.

David Zaffrann informed Brooklyn Center Mayor Mike Elliott that he will be resigning at the end of the month. Zaffrann was hired in January.

In a statement to CCX News, Zaffrann said he “will be leaving to pursue other opportunities,” but said he “will continue to support this project in other ways.”

Brooklyn Center set aside $80,000 in its 2022 budget for the Implementation Committee manager position.

The committee, which includes the mother of Daunte Wright, is charged with rolling out several public safety reform initiatives. They include installing a new mental health unit and a civilian traffic enforcement response unit for non-moving violations. Those efforts are partially funded by the freezing of three vacant police officer positions.

In a statement to CCX News, Elliott thanked Zaffrann for his work, saying it came “at a pivotal moment” for the city.

Elliott said the process for hiring a new implementation committee manager will begin “as soon as possible,” adding that it likely begin within the coming weeks. 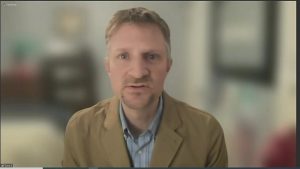 David Zaffrann spoke to the Brooklyn Center City Council during a virtual meeting in January.