It’s a project in Brooklyn Center that has been discussed for the better part of two decades. Now, the so-called “opportunity site,” 80 acres of land including the former Brooklyn Center Target store, is back in the conversation.

On Monday, the city’s Economic Development Authority (EDA), which consists of city council members, approved a preliminary agreement with a development team to redevelop some of the land. The initial redevelopment focuses on 15 acres at the northeast corner of Shingle Creek Parkway and Bass Lake Road. The entire 80-acre site is bounded by Shingle Creek Parkway on the west, Bass Lake Road and Highway 100 on the south and southeast, and Summit Drive on the east and north.

According to a concept plan, the project would create five new urban blocks with a mix of housing and green space, along with new roads and plazas. The project would be centered around six apartments, the biggest of which would be a 289-unit, 4-6 story, market-rate complex. Another 205-unit building would be mixed income with 51 percent of the units designated for lower incomes. Four smaller buildings, approximately 60 to 70 units in size, would be built for tenants at 30 to 60 percent of the area’s median income.

The concept also includes a new 4-acre regional park operated by the Three Rivers Park District located in the heart of the opportunity site. According to city documents, Three Rivers has budgeted for the park in its 2024 funding year.

Other parts of the plan include an event center campus with a child care center and an entrepreneurial market plaza, a building that will serve as a business incubator.

City officials say the goal of the initial phase is to provide a catalyst for future development phases.

The project involves several entities, including Minneapolis-based Alatus development company. Project for Pride in Living, a Minneapolis nonprofit, will lead the affordable housing component. Resurrecting Faith World Ministries, a Minneapolis church group, is leading efforts for the event center, which could also include micro retail and mental health and therapy suites.

“The three of them are coming together in what I would say is a fairly unique partnership,” said Meg Beekman, the city’s community development director. 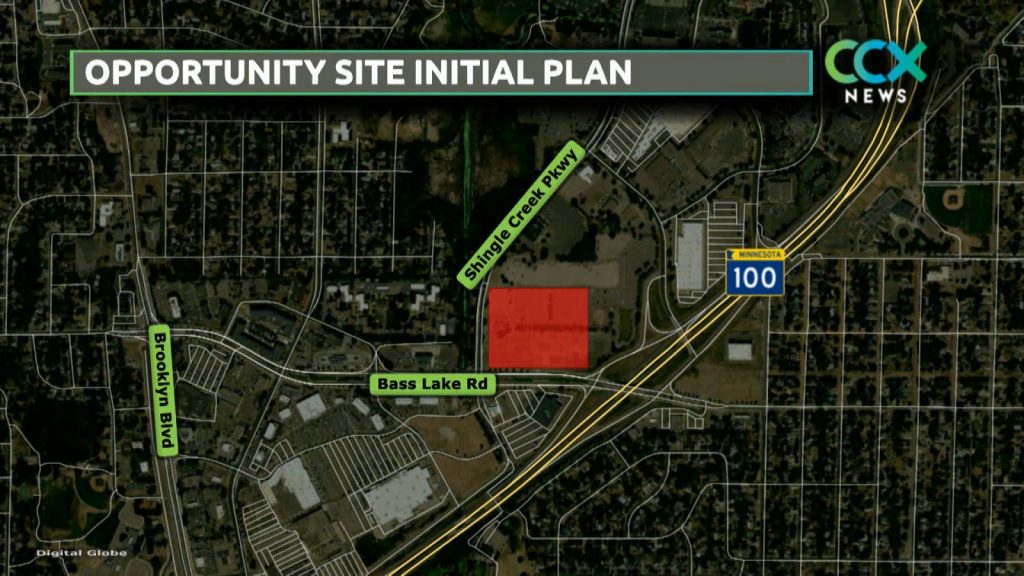 Concern about too much affordable housing

Beekman says the plan is the result of “years of community engagement.” However, it does come with some concerns. Brooklyn Center City Council member Dan Ryan had reservations about the level of affordable housing included in the plan and how it will impact the city economically 20 years down the line.

“I am acutely aware of the importance that this plan has to future of Brooklyn Center,” said Ryan. “And I had some concerns, not just some concerns, but grave concerns about the level of affordable housing included in the plans for this.”

Brooklyn Center has the highest poverty rate of any suburb in Hennepin County. U.S. Census data show 15.1 percent of residents live in poverty. The city’s median household income is $59,550.

Ryan said he voted for previous affordable housing projects, but wonders how much is too much.

“The question isn’t that we don’t need more affordable housing. The question is how much do we need and where should we put it,” said Ryan.

Several development concepts were put forward previously, but none made its way forward.

“None of them really fit with the vision of the mixed-use area,” said Beekman.

The EDA approved the preliminary development agreement by a 5-0 vote.

Next up: community engagement

The city’s mission statement for the project is “to create a sustainable and equitable housing spectrum with ancillary growth and economic prosperity tools that are supportive of the diverse, evolving and entrepreneurial community that is the City of Brooklyn Center.”

Officials say the initial phase, first proposed by Alatus in 2018, became the best fit for the city’s master plan. The city council fine-tuned the concept plan over the last couple of years to include affordable housing.

The EDA acquired parcels for the intial phase in 2008 and 2018. The pilot site is largely vacant except for Ocean Buffet, a restaurant that is expected to work out a lease and relocation agreement with the city.

The next steps for the project include a series of community engagement meetings hosted by the developers. An environmental review will also take place over the next two months.

The city’s planning commission and city council expects to review the building plans in May and June.

“This is something we’re going to need to continue to work on,” said Brooklyn Center Mayor Mike Elliott.