The city of Brooklyn Center announced the creation of a new nine-member community crisis team, although details of what the team does and who serves on it remain unclear.

Acting city manager Reggie Edwards says the group plans to meet daily over the next ten days to discuss the protests and the response.

“For example, we increased communication,” said Reggie Edwards, acting city manager. “Now that we have community coordinating with our officers, we’re able to say ‘let’s share our phone numbers and let’s simply talk.’ When you see something happening, you can communicate with us. When we know something we can communicate with you. It’s a small step, but it’s something that would not have happened had we not started coming together and working together as a team.”

The information was released at a press conference. The new team is comprised of people representing Brooklyn Center businesses, churches, schools, nonprofit organizations and city government. 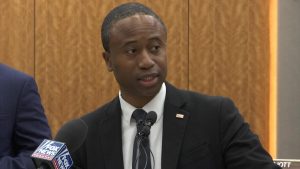 “It’s our goal to make sure that people continue to be heard. The community crisis team that’s been assembled is one way of making sure that the grievances that people are putting forward are channeled in a way that we can hear and address those grievances,” said Brooklyn Center mayor Mike Elliott.

The city says the community crisis team is still forming, and a formal introduction of the members will happen soon.