The Brooklyn Center City Council voted 4-0 Monday night to approve a 2022 preliminary budget and levy. The budget approval comes during a particularly challenging time for city officials as they wrestle with funding elements of the public safety resolution approved in May.

“This budget is particularly, significantly challenging given the time of all the city is going through, has gone through and continues to go through,” said Dr. Reggie Edwards, Brooklyn Center’s city manager.

Edwards cited challenges such as the COVID-19 pandemic, the April shooting of Daunte Wright by a former Brooklyn Center police officer, civil unrest due to the shooting and the city’s higher poverty rate.

According to city officials, the city’s total tax levy would increase 6.93 percent. However, most residential property owners will see a tax decrease, Edwards said.

For a median home value of $223,000 in Brooklyn Center, residents would see a $20 decrease in city taxes. Andy Splinter, the city’s interim finance director, said the decertification of a TIF district was added to the tax rolls, decreasing the city’s overall tax rate.

Mayor Mike Elliott abstained from the budget vote. He did not give a reason for the abstention.

The city could still lower the levy, but cannot raise it, between now and its final vote, scheduled for Dec. 6. 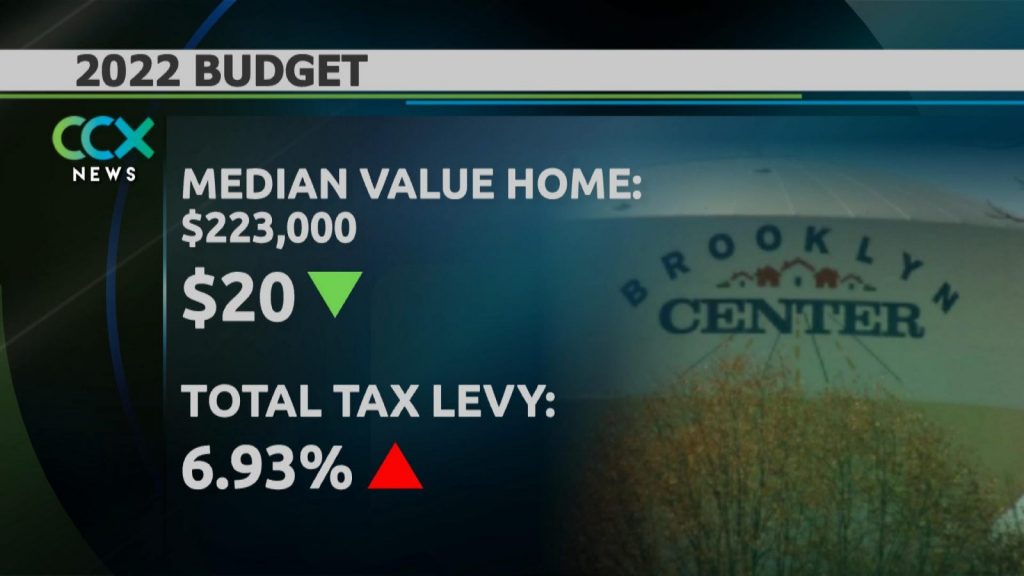 The budget includes the new Office of Community Prevention, Health and Safety at a cost of $154,850. The office would include the hire of a person to coordinate efforts among departments with a specific focus on the police and fire departments. That person would report to the city manager.

Edwards previously stated the new office will help satisfy the “spirit of the resolution” approved in May. At a previous meeting, Edwards said funding the entire resolution was “not fiscally possible.”

Police services would make up 39 percent of the 2022 budget. By comparison, in 2021, Golden Valley dedicated 28.6 percent of its budget to policing. In Crystal it was 18.3 percent, while Champlin budgeted 11.9 percent for police. Edwards said comparison cities have different priorities and resources to work with.

“The dynamics of Brooklyn Center is different than Champlin, and different than New Hope, etc.,” said Edwards. “We have to do more with less,” he added.

Edwards said the city has had to rely on overtime to cover police services.

“As of right now, we are short-staffed, therefore there would be some staff that would be doing overtime in order to provide services of the department,” said Edwards.

Brooklyn Center City Council member April Graves wondered how realistic it is to get back to 49.

“I don’t know what’s going to happen, whether we would actually get back to being a fully-staffed police department or not, but I think that if we’re still able to make positive moves forward in public safety and public health in the city without a full police force, then it makes a pretty strong case that maybe some of our resources should be allocated differently,” said Graves.