Nearly every town in America has a local watering hole that serves as a home away from home.

“There have been people who have been patronizing this place for a long time, and I know it means something to them as it does to me,” said Brian Pratt, the Legion’s general manager.

It’s a small gathering spot housed in a building that was formerly occupied by a Burger King. But sometimes, big things can come in small packages.

“You saw how small our kitchen is, and the amount of food we turn out of here for this small kitchen, it’s pretty impressive,” Pratt said.

That’s especially true on Fridays during the Christian season of Lent.

A hot spot for fried fish

To cater to those who want to avoid eating meat on Fridays, the American Legion serves up a hearty portion of walleye, baked potato and coleslaw. The walleye special has become a fan favorite.

On a typical Friday, the Legion sells roughly 50 orders of the walleye special for $12.95 apiece, and people keep coming back for more. 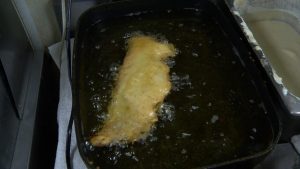 A big chunk of walleye being fried at the Brooklyn Center American Legion.

“I would say it’s the product. If the product wasn’t any good they wouldn’t come back,” Pratt said. “So it’s important for us to maintain that standard and get people back. We want repeat business.”

Repeat business is what’s been able to help them stay afloat during the pandemic. And that’s important, not just because it keeps the doors open, but also because of the Legion’s role in the community.

“We’ve made donations to the local high schools here for their senior parties and stuff, and we donate a lot of money out of here and we try to keep it within our communities,” Pratt said.

The Legion may never be able to compete with some of the major restaurants, but the goal is that anyone who orders one of their specials won’t walk away disappointed.

“Excellent product for a reasonable price is kind of what we’re all about here,” Pratt said.

The walleye dinner is available at the Brooklyn Center American Legion on March 5, March 12, March 26 and April 2.