Attacking the Winter Storm: Crews Plan to “Get on It Early and Stay on It”

Forecast models for Wednesday’s snow changed quickly, which meant public works crews in our area had to mobilize to be ready for a much larger snowstorm than was first anticipated.

In Crystal Public Works crews met on Wednesday morning ahead of the winter storm. 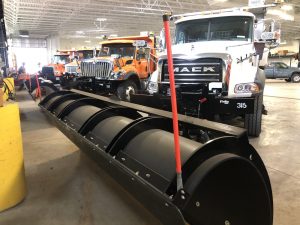 “Our plan is to get on it early and stay on it so hopefully we’ll avoid some of that ice pack,” said Bill Bowman, street superintendent. “We’re planning for the worst, hoping for the best.”

It might be the snow that turns our area from having a brown Christmas to a white Christmas, but it’s not the first snowfall of the year. The equipment was rolled out earlier in the year for an October snowstorm.

Crystal public works says expect progress to be slow and road conditions to be poor, despite crews starting early and working throughout the storm to try to prevent roads becoming blocks of ice.

Once conditions drop below 15 degrees, which is in the forecast, salt will not be effective so roads will be in tough shape. It is advised to stay off the roads and remember the snow emergency rules for your city.