After Delays, Construction to Begin on I-394 Office Tower Project

A I-394 office tower project on the Golden Valley and St. Louis Park Border that has had several years of delays is now getting closer to moving again.

The planned 10 West End development includes an 11-story office tower and a seven-story parking ramp. The Golden Valley City Council approved an amended developer’s agreement for the project this week.

Ryan Cos. is leading the office tower and parking ramp project. Under the developer’s agreement, the city would require public art on the side of the parking ramp facing I-394. The art has not yet been defined. A number of Golden Valley and St. Louis Park civic groups will help determine what the art will look like. 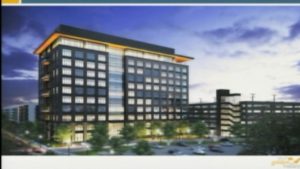