An early-morning fire shook a Maple Grove neighborhood, leaving one family without their home. Firefighters were first alerted at about 1:45 a.m. to a fire at a home on Quaker Lane near 108th Place North. When firefighters arrived, flames could be seen along the roof.

Neighbor Ken Schumack awoke to police knocking on his door alerting him of the fire.

“I could hardly believe it,” said Schumack, who described a “big orange and black fireball” coming out of his neighbor’s roof.

Schumack said he took his garden hose to battle the flames on his neighbor’s deck, but the fire kept coming back. 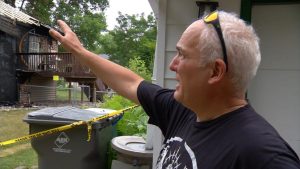 “When it gets so hot, you really beat people up and have to spread the work out,” Chief Bush said.

“You’re carrying 65 pounds of gear before you start doing any work,” he said. “We heat up really fast and it’s a struggle to stay hydrated.”

Schumack said he couldn’t believe his eyes as he saw firefighters work to put out the fire.

“There’s still flames everywhere. And you could tell by the water that was spraying up that the firefighters were right in the house in the flames. I can’t imagine doing something like that,” he said.

There were no injuries from the fire and firefighters saved a cat. Chief Bush also said that while the home is not livable, possessions inside are salvageable.

The cause of the fire is under investigation.