In 2020, the drive-through became the go-to, an unassuming way to get things done and keep life normal too.

Food banks and nonprofits latched on to the concept early.  But what was new then, quickly became commonplace. Food banks have passed out school supplies, turkeys for Thanksgiving, and gifts for Christmas all in a drive-through format.

As the need in the community grew, local citizens took action too, utilizing a drive-through to collect donations. People donated en masse for one drive called “We are Wayzata Strong” that filled boxes of food for nonprofits. 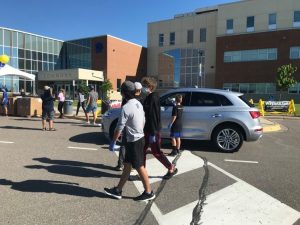 The “We are Wayzata Strong” food drive collected hundreds of items for Interfaith Outreach.

COVID-19 testing was offered by drive-through starting in May at a Robbinsdale location. The format allowed hundreds of people to move through the line and be tested without leaving their cars. Even smaller sites, like one in Osseo, could cycle through 25-30 people a day.

Restaurants have relied on drive-throughs more than ever to survive. Restaurants that did not have a drive-through had to get creative to create one where there wasn’t one before, like Honey & Mackie’s in Plymouth. Cities relaxed their rules to allow temporary drive-throughs to happen. When the Minnesota State Fair became a drive-through experience, one Brooklyn Center restaurant named Que Viet got the green light to sell their egg rolls there.

Drive-throughs are a lot like parades, and 2020 saw plenty of parades through neighborhoods. Students rode in drive-though experiences to celebrate graduation and teachers organized parades to wave to students at the end of the school year. For some, the parades in May and June marked the first time teachers and students seen each other since the pandemic forced schools to close in March. 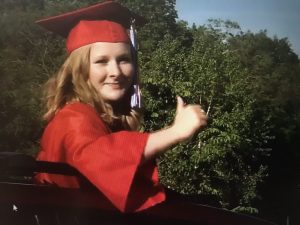 Armstrong senior gives teachers a thumbs up during parade.

Retirements happened too. Brooklyn Center organized a parade for a longtime employee with drive-through well wishes.

Candidates running for office are generally a staple in parades, but since all the community parades were canceled, one group organized their own and drove through Crystal neightborhoods.

But perhaps no parades were more well-received than Birthday parades and there were dozens if not hundreds of those. Parents and friends organized parades for kids of all ages and cities got involved too. Some, like Crystal, took reservations for birthday parades that delivered smiles and sirens too.

In a year where people had to always put space between themselves and others, the drive-though gave people a way to get jobs done and keep life normal, whether it was waving hello to a friend or picking up a meal.