Every once in a while, a craving comes along that has to be satisfied.

“Love this place,” said Deb Redmann of St. Michael, referring to Brooklyn Center’s Que Viet. “I have family in town from Memphis and every time they come in town this is my treat.”

At a time when many restaurants are struggling, Brooklyn Center’s Que Viet is proof that not even a pandemic can stop people from getting their hands on delicious food.

“It’s been doing really well, especially during COVID,” said Minh Lam, who owns the Que Viet on Brooklyn Boulevard, along with a Que Viet food truck.

Big, not just in size, but in overall popularity.

Three years ago, the family-owned restaurant got its own stand at the Minnesota State Fair, where they sell garlic cream cheese wontons and giant egg rolls on a stick.

“It took us seven years to get in and it was tough because they won’t let you into the bigger fairs unless you do the small fairs,” Lam said. “And they want to know that you have a resume that you can handle big crowds and people standing in line and just moving it.” 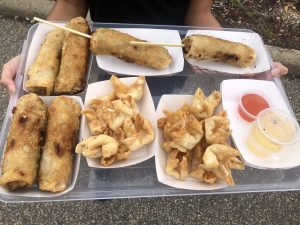 Que Viet’s menu at the State Fair Food Parade will consist of garlic cream cheese wontons and giant egg rolls on a stick.

Not only did they prove that they could handle the big crowds, but Lam says their stand did even better than expected.

“It’s been crazy. Last year was our best year ever, which is amazing,” she said.

What’s not amazing is that COVID-19 forced the cancellation of the State Fair that everyone knows and loves. So instead, officials from the State Fair announced that they’re replacing the traditional event with a State Fair Food Parade, where people can drive through the fairgrounds and buy food from one of 16 vendors.

Que Viet happens to be one of the 16.

“I think that’s great. It’s wonderful for them,” said Redmann, the customer from St. Michael.

“It’s great. Too bad i didn’t get tickets because I love going to the State Fair for the food,” said Ill, the customer from Maple Grove.

Tickets for the food parade may be sold out, but the good news is that egg roll lovers in the northwest metro don’t need a ticket to get their hands on this deep-fried deliciousness.

“Our egg rolls are the best egg rolls ever,” Lam said.