The city of Crystal is helping to put smiles on the faces of children during the COVID-19 stay-at-home order.

Crystal police, the Crystal Public Works Department and the West Metro Fire-Rescue District are sponsoring a so-called “birthday brigade.” It’s a convoy of city vehicles that parade down the street of a birthday boy or girl ages 12 and under. The vehicle stops in front of a home, honks a horn or sounds a siren, waves and drives away. 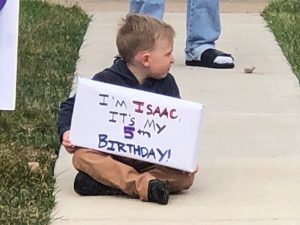 Isaac Flesner holds a sign and watches police cars in the “birthday brigade.”

The birthday brigade paid a visit to Isaac Flesner Wednesday as he and his daycare friends sat on the front lawn in anticipation of a surprise for his birthday.

After a few minutes of waiting patiently, his big surprise arrived. The Crystal Police Department, Crystal Public Works Department, and West Metro firefighters rolled down the street. They honked their horns, sounded sirens, and waved to wish Isaac a happy birthday. The parade lasted a little over a minute, but Isaac smiled long after the event was over.

“He was so excited, “said his Isaac’s parents, Joanne and Mat Flesner.

“All he wanted to do was have a birthday party with his cousin. So, this is really great to show him all the city vehicles,” said Joanne Flesner.

“We were worried there would be nothing. So, having something was good. It was a blast, “said Isaac’s father, Mat.

“We saw this as another way we can support our residents and try to bring a smile to the kid’s faces during these challenging times,” said Ray.

“You know, this is a lot of fun to do,” said Sgt. Justin Tourville, a Crystal police officer. “It’s pretty cool. I’m happy we’re able to do this.”

And perhaps this brigade was fitting for 5-year-old Isaac. What does he want to be when he grows up?

Birthday brigade visits can only occur during the work week (Monday-Friday), and between one of two time periods, either  9 – 11 a.m. or 1 – 3 p.m.