Lisa Jacobson will be the next Mayor of Brooklyn Park. 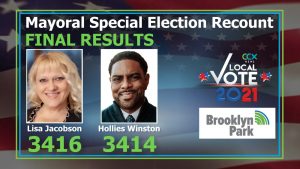 In a special meeting, the city council reviewed seven challenged ballots from the recount and certified the results. The city council also serves as the Board of Certification and is responsible for canvassing election results. Full Article Here 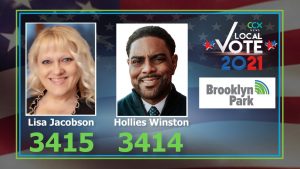 The Brooklyn Park special mayoral election is headed for a recount, which will begin at 9 a.m. Thursday in the Garden View Room at the Community Activity Center. Council member Lisa Jacobson came out one vote ahead of Hollies Winston in preliminary vote totals last Tuesday.  Read full story here 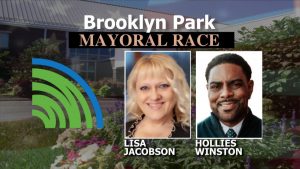 Initial numbers put Lisa Jacobson over Hollis Winston by one vote in the special election for Brooklyn Park Mayor. The close call could trigger a recount. 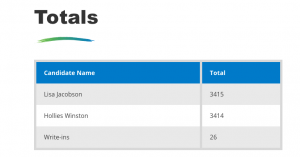 The special election for Brooklyn Park Mayor is on August 10th. Candidates Lisa Jacobson and Hollies Winston sat-down to answer the following questions for CCX News. Candidates were invited to our studios and they knew the questions ahead of time. 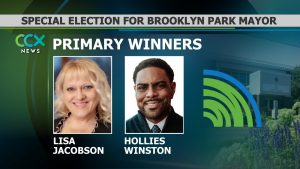 The winning candidate in August will fill the remaining time in Jeff Lunde’s term. Lunde resigned in January after winning an election to represent District 1 on the Hennepin County Board, leaving two years on his term.

Turnout in the primary was projected to be low. As of last week, clerk Devin Montero said around 1,000 votes had been cast and he projected turnout to be around 15 percent.

Total Votes in All Precincts

There are seven candidates who have filed to run for Brooklyn Park mayor. The primary is scheduled for April 13 and the special election will be August 10.

Candidates participated in a forum at city hall Tuesday night.

The candidates are running to replace Jeff Lunde, who won election to serve on the Hennepin County Board of Commissioners. Lunde vacated his mayoral seat with nearly two years left on his term. Winston lost to Lunde in 2018.