It’s a new era for the Hennepin County Board of Commissioners. Two new commissioners representing cities in the northwest suburbs were sworn in Monday, replacing two longtime commissioners.

Former Brooklyn Park Mayor Jeff Lunde was sworn in virtually with his wife and two sons by his side.

“I want to thank the county staff and most of all I want to thank the residents of District 1 for bestowing on me the honor to do what I can to fight for all of you moving forward,” said Lunde after taking the oath. “And last I want to thank, as always, my family who remains the most important thing in my life.”

Lunde replaces Mike Opat to serve in District 1, which includes the cities of Brooklyn Center, Brooklyn Park, Crystal, New Hope, Osseo and Robbinsdale. Opat represented District 1 for 28 years, but did not run for re-election, feeling the time was right to move on. 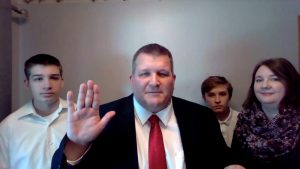 Anderson Sworn In to Serve District 7

Kevin Anderson, a Maple Grove resident, was also sworn in Monday. He too was sworn in virtually with his family by his side.

After getting sworn in, Anderson recalled how a friend, Rosemary Rocco, encouraged him to run for county board.

“For the last two years, that title of commissioner has been an aspiration, always after my name separated by the word ‘for,'” said Anderson. “And its with this oath that I’m reminded not just of the title that comes with the name, but the responsibilities that come with it as well.”

Anderson replaces Jeff Johnson to serve in District 7, which includes Maple Grove and the northwest part of Plymouth. Johnson, who served on the board since 2009, did not run for re-election last fall, saying he wanted to stick to a three-term limit. 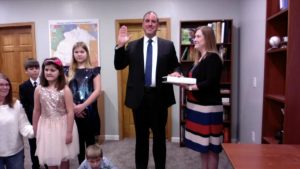 Two other commissioners who represent areas outside the CCX News viewing area were also sworn in. Debbie Goettel was elected to a second term in District 2, which includes Bloomington, Richfield and southern Eden Prairie. Chris LaTondresse replaces Jan Callison, who did not seek re-election in District 6. That district includes the cities of Minnetonka, Edina, Hopkins and northern Eden Prairie.