Osseo junior Jacob Meissner elected to move up a weight to compete at 220 pounds for the postseason and it paid off in a state championship.

After surviving an “ultimate tie-breaker” to edge RJ Chakolis of Hopkins in the semifinals, Meissner overcame an injury to beat Tommy Johnson of Shakopee 5-3 in the finals.

Cael Swensen’s younger brother Logan placed second in the 106-pound class, losing 3-1 in an ultimate tie-breaker to Alan Koehler of Prior Lake.

Chakolis, a state champ at 195 last season, won the third place match at 220 after the loss to Meissner.

Adam Cherne of Wayzata was fourth at 160 pounds.

Calvin Lonnquist of Wayzata placed fifth at 132 pounds, as did his teammate Dominic Heim at 182 pounds. 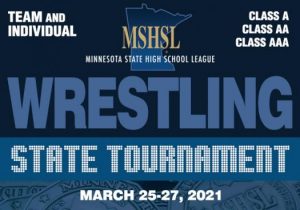