The Totino-Grace boys hockey team rallied past Armstrong-Cooper for a 5-4 overtime win Saturday.

Armstrong Cooper built a 2-0 lead on goals by Jameson Essen and Max Burns before the Eagles cut the lead in half late in the first period.

On a rush in the final seconds of the period Thomas Quast deflected Clayton Derr’s pass in with three seconds remaining to pull TG within 2-1.

After the Wings went up 3-1, Sam Johnson and Shane Dean scored for Totino-Grace to tie the game 3-3 after two periods.

The Eagles capitalized on a Wings giveaway early in the third as Colton Horak scored to give the Eagles their first lead at 4-3.

With just over three minutes remaining, Armstrong-Cooper tied it as Tanner Rausch buried the rebound of Essen’s shot to make it 4-4.

Just over a minute into overtime, Eagles defenseman Quast netted his second of the game to win it, banking it off a Wings player and in on a shot from the point.

TG improved to 7-7 with the win, while Armstrong-Cooper dropped to 7-9. 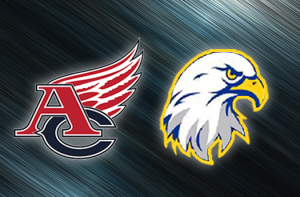