The state Class AAA track and field finals featured some great performances for athletes from the northwest suburbs.

Richlu Tudee of the Rebels won the 100 and 200 meter dashes and was part of the CP championship 4 x 100 relay.

Lorenzo Andrews finished second in the long jump for Champlin Park, with Sean Erickson taking fourth in the discus.

Armstrong tied for fourth in the boys team standings, helped by Noah Breker, who placed fourth in the 1600 after earlier winning the 3200.

Peyton Newbern placed fifth in the high jump with Jordan McClom sixth in the long jump for the Falcons.

Jaxon Howard of Cooper placed second in the discus, getting beat out by a state-record throw on the final try of the meet by Hayden Bills of Rosemount.

Howard had placed second in the shot put earlier.

Michael Allen of Wayzata won the 100, 200, and 1600 wheelchair races along with the shot put wheelchair competition.

On the girls side, Wayzata was the top local team, in fourth place.

Individual standouts included Jordyn Borsch of Maple Grove, who won the 100 and 400 meters and placed third in the 200.

Teegan Anderson of Wayzata was second in the 800; teammate Abbey Nechanicky placed third in the 1600 after earlier winning the 3200.

Sydney Drevlow of Hopkins was second in the 1600.

Laubenra Ben of Park Center placed fourth in the 100, one spot ahead of Wayzata’s Mini Jallah. Ben finished second in the 200. 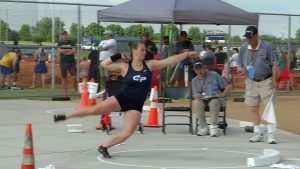 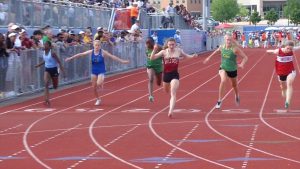 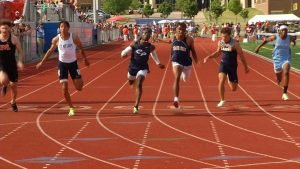