The Park Center boys basketball team beat Eastview 54-39 in the state class AAAA semifinals to advance to the championship game.

It was a slow paced defensive battle, with both teams struggling to score in the first half.

Park Center did put together a run to build a 22-13 halftime lead.

They extended the lead early in the second half and were never seriously threatened down the stretch.

Braeden Carrington had 13 points and Leo Torbor 12 to lead the Pirates.

Park Center is in the championship game for the second time in school history. 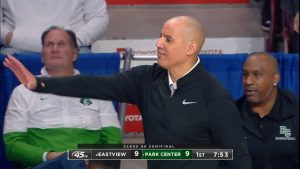