It was a message of inspiration, delivered with conviction and passion.

The 1989 Anoka High School graduate is out promoting her new book “My Greatest Save” in which she chronicles her athletic and family life growing up in Dayton, all the way to her post-soccer career in which depression set in because of a life-altering concussion suffered in 2010.

The World Cup winning goalie for the United States in 1999 was a guest Wednesday night of the Fusion Soccer Club in Plymouth.

Scurry signed copies of her book and posed for pictures as players wore her Olympic gold medals.

The 50-year old now lives in Virginia and is an advocate for concussion awareness in soccer. 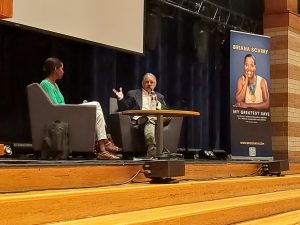